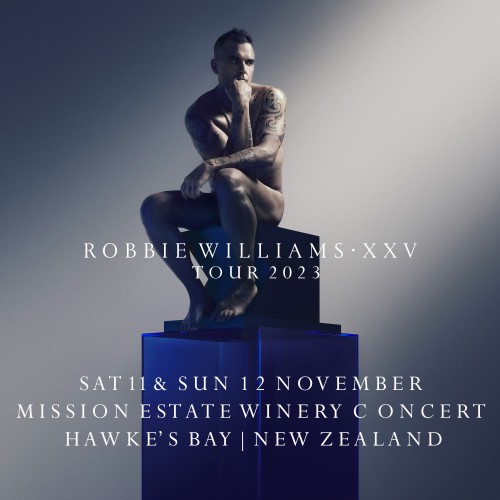 Robbie Williams is without a doubt one of the finest male pop stars of his generation, having sold over 85 million albums, 13 UK number one albums (the most of any solo artist, equalled only by Elvis Presley), and 14 number one singles as a solo artist.

The mission concert which boasts a proud history of presenting the world's biggest and best entertainers including Rod Stewart, Elton John, Phil Collins, and many more since 1993, marks three decades of amazing entertainment with Robbie's performances on Saturday, 11 November and now, Sunday 12 November 2023

With his new album XXV released earlier this month, Robbie celebrates twenty-five years as a solo artist. A journey through his career-defining catalog, featuring No.1 hit singles and fan favorites, the songs of XXV offer a fresh and illuminating perspective, having been newly orchestrated by Jules Buckley, Guy Chambers, and Steve Sidwell, and re-recorded with the acclaimed Metropole Orkest in The Netherlands.

Tickets to the Sunday 12 November Mission Concert are on sale now at missionconcert.co.nz. The Saturday 11 November show sold out in under an hour. If you're not a club member, simply register to access tickets.

Park overnight within walking distance from the event thanks to the Local NZMCA Area.

To book please email [email protected] advising which concert you're attending, and which parking days you require.

Click here for the parking map and full payment details. Cash only on the day, or by internet banking prior to your arrival. Note there are no eftpos facilities available on site.