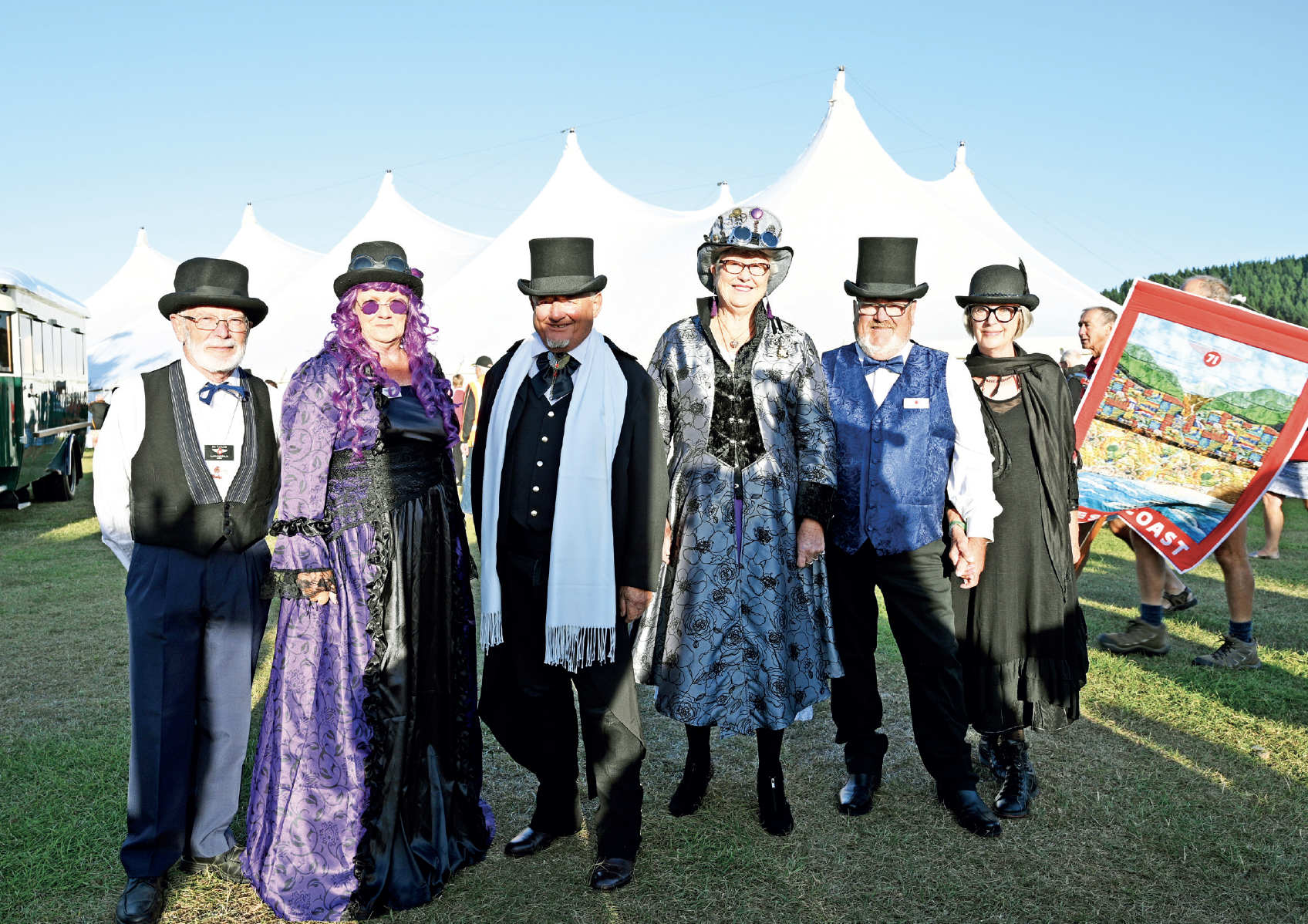 Focus on fun at the Oamaru National Rally

Well done South Canterbury Area – that was the overwhelming response from NZMCA members who travelled from throughout the country to take part in the Victorian Capers at the Association’s 64th National Rally at the Oamaru Racecourse.

It was a get-together that could easily have been overshadowed by the drama of President-elect Ross Hamilton being unable to take up the role after a serious cycling injury. However the focus was very firmly fixed on fun right from the Opening Ceremony when Board members entered the marquee wearing Victorian and Steam Punk costumes; and the tone was further set by former TV personality Jim Hopkins – who these days is a Waitaki District councillor – in an hilarious welcome speech.

Local MP Jacqui Dean got in on the act, extolling the virtues of local attractions but then turning serious when she described the NZMCA as ‘the adult in the room’ when it came to the contentious issue of freedom camping.

Outside the formalities, Rally convenor Bill Paton and his team – easily recognisable in their bright yellow shirts and black top hats – had organised a full program with highlights which included the evening entertainment, a decent range of trade displays and some interesting workshops covering everything from mental health and wellbeing to self-containment and tips on getting the most from the NZMCA’s travel App.

Oamaru’s Victorian past was never far away with costumed members aplenty, a penny farthing ridden through the rally grounds, and a vintage vehicle (and we’re not talking about the beautifully-restored REO which fitted right in) offering rides to begowned ladies.

The tours from the rally site were hugely popular too; some 793 members enjoyed a tour of Dot and Neil Smith’s Riverstone Castle; while about half that many joined the Parkside Quarry Tour that took them to the source of the beautiful white stone that’s such a key part of Oamaru’s distinctive look.

And then there was the lovely old town of Oamaru itself, with its many attractions and amenities, to explore and enjoy.

At a time when the drop-off in international tourists was just starting to be felt in the region, the almost 700 vans (689 to be exact) registered in the rally provided a handy and very noticeable economic boost to the town. The vast majority of those staying at the rally took advantage of the shuttle buses which ran on a continuous loop for most of each day to head the five kilometres or so down to the centre of town.

There they were able to marvel at the number of stunning white stone buildings that are still in daily use, enjoy a coffee or a country-sized meal at the famous (in Oamaru) Fat Sally’s bar and head into the historic Victorian district and Steam Punk HQ. 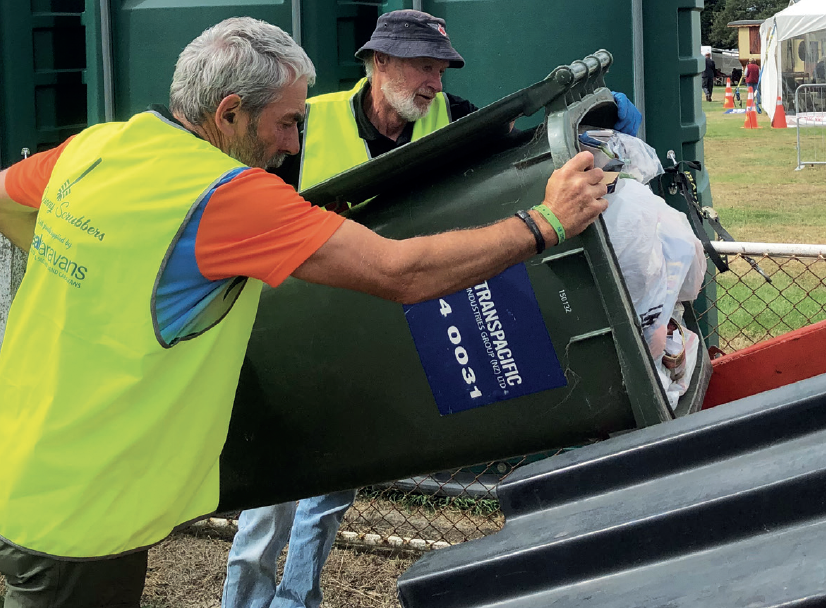 Thanks to the volunteers

Keen to praise the small army of volunteers who turned out to help run the event, Rally Convenor Bill Paton says there were 171 of them in total – from throughout the country. “We were very grateful for their help.”

He also acknowledged the effort that many of those present had put into getting into the rally’s Victorian Capers theme: “I was very pleased the way members of the Board and the general membership turned out in their Victorian and Steam Punk attire which added to the atmosphere of the rally.”

Delighted that the event had had a positive impact on local businesses, Bill said it was also pleasing that ‘a large number of members remained in the area after the rally to further explore the Waitaki district’.

Bill was also keen to point out that there’s a great range of photos taken on site by local photographer, Kelly Coleman, which are available to be viewed on Facebook at Kelly Coleman Visual Art under the Folder NZMCA National Rally & AGM. 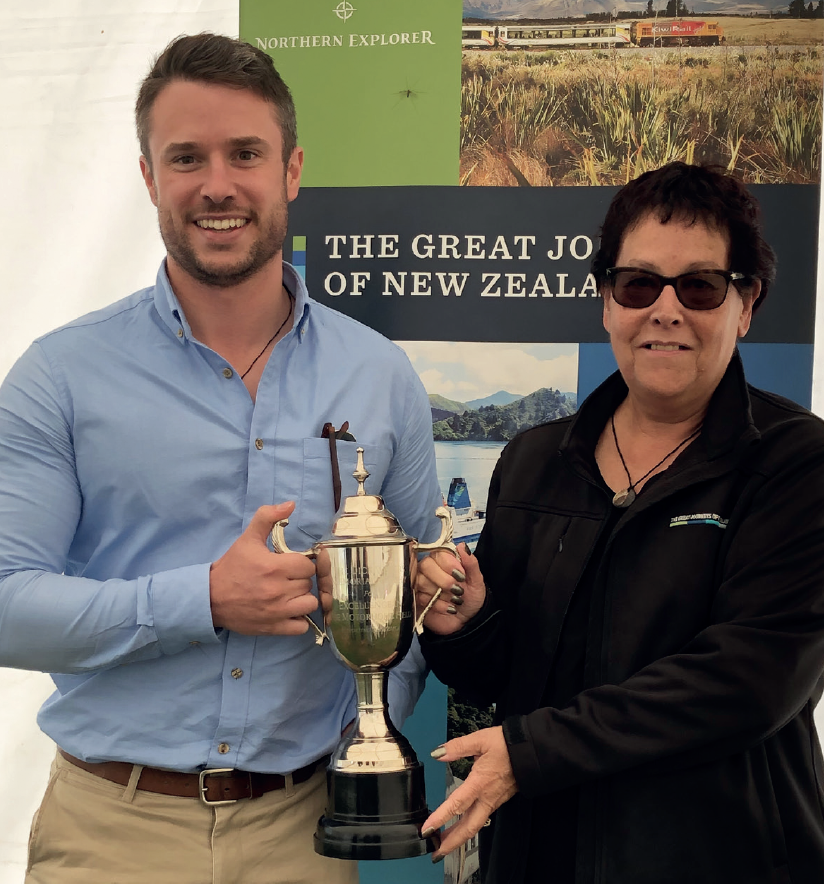 KIWIRAIL SALES SUPPORT CO-ORDINATOR FAYE ALLISON AND SAM PARSONS, OF DOC, WERE DELIGHTED TO RECEIVE THE DICK WATERS MEMORIAL TROPHY ON BEHALF OF THEIR ORGANISATIONS.

The Great Journeys of New Zealand’s contribution to the motorhome industry has been recognised for the second year running.

At the NZMCA’s recent AGM in Oamaru the company was announced as joint winner of the Dick Waters Memorial Trophy. This year Great Journeys of New Zealand won the award along with the Department of Conservation for their innovative partnership with the NZMCA in helping save New Zealand’s seriously endangered kea population.

The initiative involves KiwiRail leasing unused land to the NZMCA to develop as member parking sites; with the net revenue being directed to the Kea Conservation Trust. As a result, the Trust – which was set up in 2006 – will benefit by a guaranteed minimum of $225,000 over the nine year period of the initial agreement.

NZMCA CEO Bruce Lochore says the unique agreement is ‘a win/win/ win for all the parties involved’ and he paid particular tribute to KiwiRail ‘for their willingness to think outside the square in bringing the idea to fruition for the benefit of DOC and the Kea Conservation Trust’.

Presented in honour of the Immediate Past President, Dick Waters, the trophy was inaugurated in 2012 to recognise an NZMCA partner or supplier’s ‘excellence in the motorhome field’.

The recipient of the annual award is chosen by the NZMCA Board and the trophy is traditionally presented during (or immediately following) the Annual General Meeting at the Association’s National Rally. 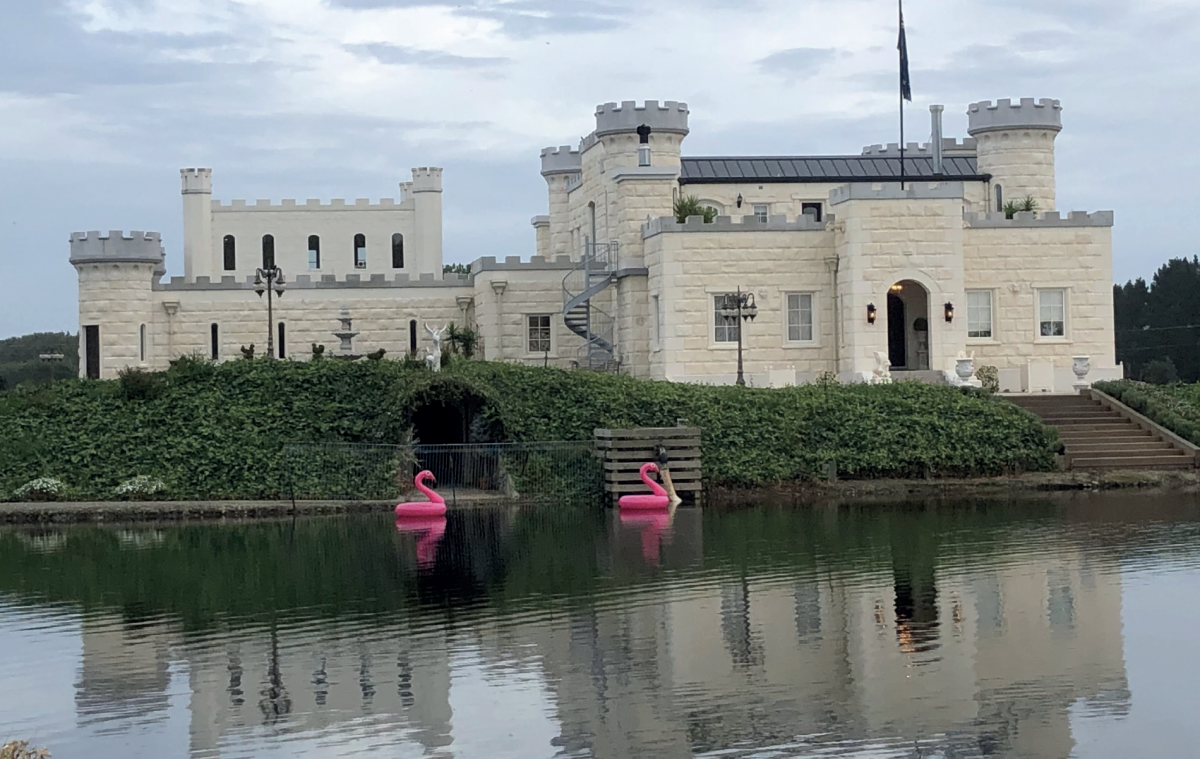 Each National Rally has its unforgettable moments; at Gisborne last year it was the unveiling of the spectacularly refurbished REO motorhome; at Cromwell a decade or so ago it was the AGM being called off for safety reasons as strong winds threatened to lift the marquee off the ground…

At Oamaru, in early March, for many members that unforgettable moment took place off-site at Whitestone Castle. Some 800 members (that’s about 16 busloads worth over three days) took part in the castle tours which the rally organisers had arranged with owners Dot and Neil Smith. Even better, Dot herself acted as tour guide; welcoming members to her amazing home.

For those who have never heard of it, Whitestone Castle is the result of one woman’s childhood fantasy of living in a castle. As a young girl Dot loved the fairytale world of Princes and castles and when she headed to England on her OE she spent weekends and any time off touring castles.

Back in New Zealand Dot married a Northland dairy farmer and reality took over as the couple raised their family and then, in the early 80s, moved south to take advantage of more affordable land prices. What followed was years of hard work on a difficult ‘pick and crowbar’ block near the Waitaki river.

“It was a very basic small cottage plonked on the edge of the property, right next to the state highway and main trunk line. It was so cold and windswept, with no paths or clothesline. “There wasn’t one tree, no soil, no fence, no shelter. It was just bloody awful,” Dot told the members in her down-to-earth manner.

Over the years however, the couple transformed the farm and as their economic position improved began purchasing neighbouring farms. They now own six properties which together milk some 5,000 cows. Remarkably, through all those years of hard toil Dot never let go of her childhood fantasy to live in a castle. In fact, she spent decades collecting suitable antiques, paintings, fabrics, suits of armour and collections of decorative crockery to furnish her dream home.

Then some ten years ago, planning began in earnest to turn that dream into reality.

It’s worth a trip to Oamaru just to hear Dot’s inspirational story – she’s truly a force of nature. To give you some idea of the project’s scale, it took a team of earthmovers three months to create the lake around the island on which the castle is built. Then it took five years and 150 tonnes of locally quarried Oamaru stone to build Dot’s castle.

Next time you’re down that way, go and have a look. You’ll come away with a heap of respect for the boundless enthusiasm Dot needed to complete such an undertaking – and a fresh belief that just sometimes fairy tales can come true. 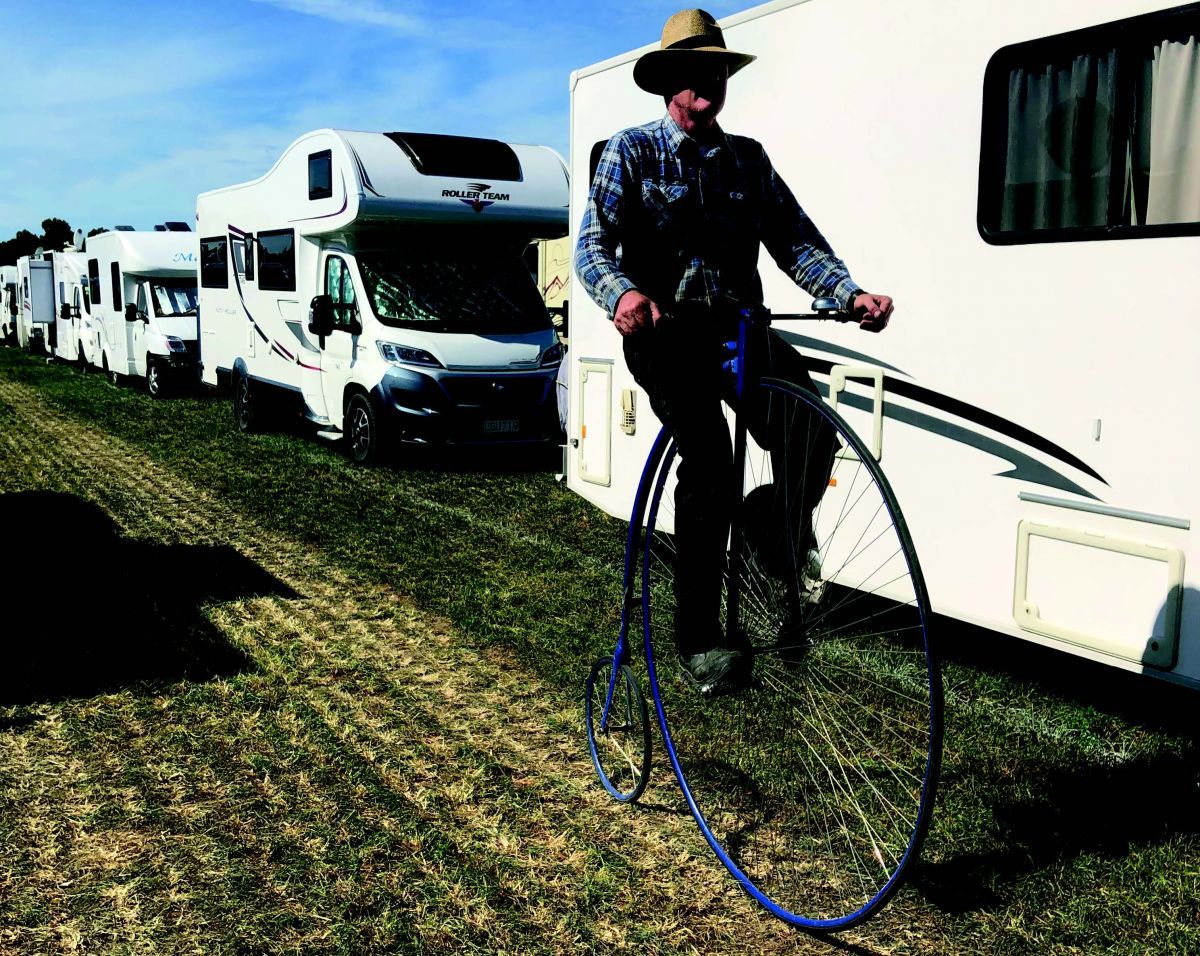 NOTHING TO SEE HERE FOLKS – JUST AN ORDINARY BICYCLE RIDDEN THROUGH THE RALLY BY OAMARU’S GRAEME SIMPSON.

Where else in New Zealand could you see a gentleman calmly riding his Penny Farthing bicycle down a row of modern motorhomes?

Only in Oamaru, of course, the home of the Ordinary bicycle – which to most of us, looks anything but ordinary. But as Penny Farthing aficionado (and worldwide parts supplier) Graeme Simpson confirms, in its day the Ordinary bicycle was the height of Victorian technology. Its large front wheel meant it could attain remarkable speeds and, despite its ungainly looks, it offers a surprisingly comfortable ride.

Graeme should know. As Club Captain of the Oamaru Ordinary Cycle Club he participates in the annual ride which can extend over four or five days. For the history buffs amongst you, the Penny Farthing was the first machine to be called a ‘bicycle’. It was popular in the 1870s and 1880s, with its large front wheel providing high speeds – owing to it travelling a large distance for every rotation of the legs – and comfort, because the large wheel provides greater shock absorption.

It became obsolete from the late 1880s with the development of modern bicycles, which provided similar speed amplification via chain-driven gear trains and comfort through pneumatic tyres. In comparison to Penny Farthings, the new machines were marketed as ‘safety bicycles’ because of the reduced danger of falling and the reduced height to fall from. 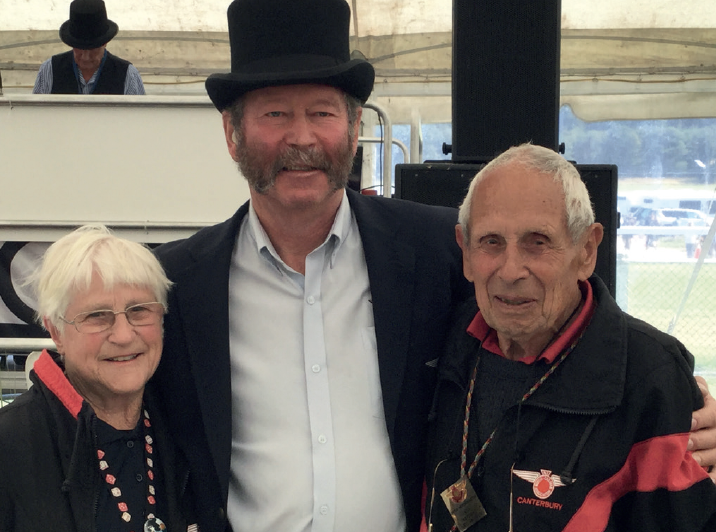 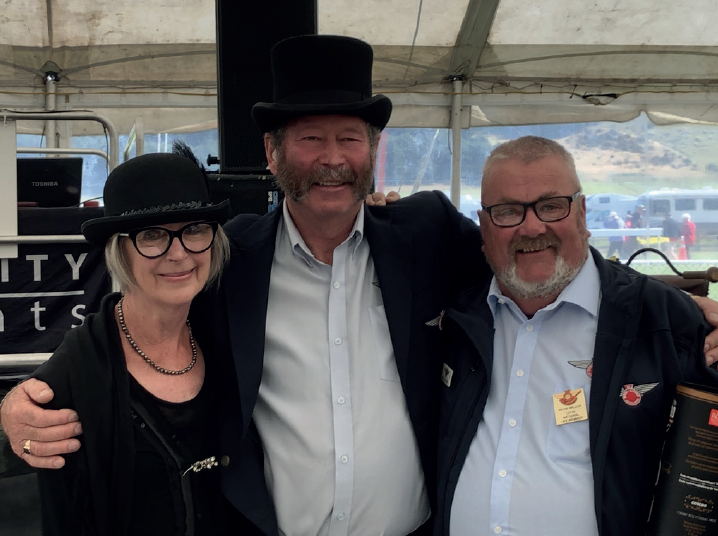 Board member Peter Willcox and his wife Robin (#13742), from the Whanganui Area 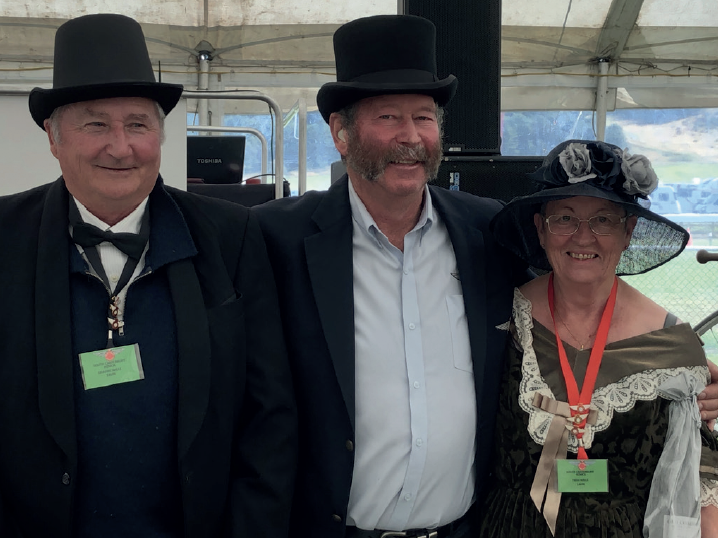 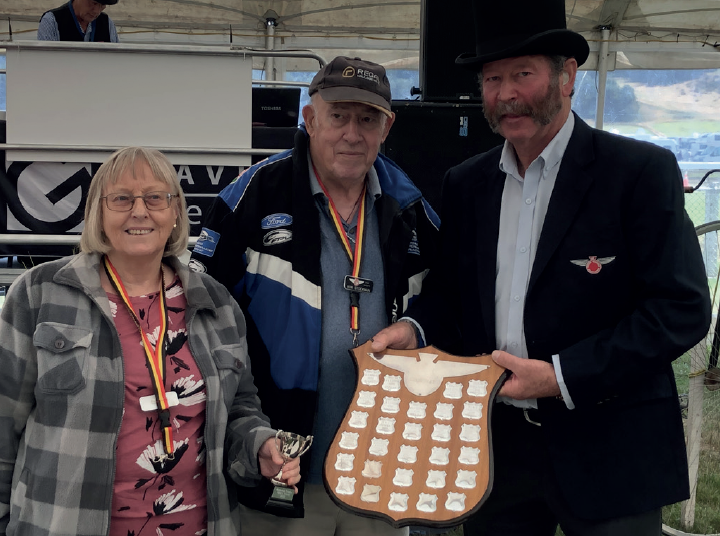 Back in his hometown, NZMCA President Bruce Stanger was looking very much the Victorian gentleman 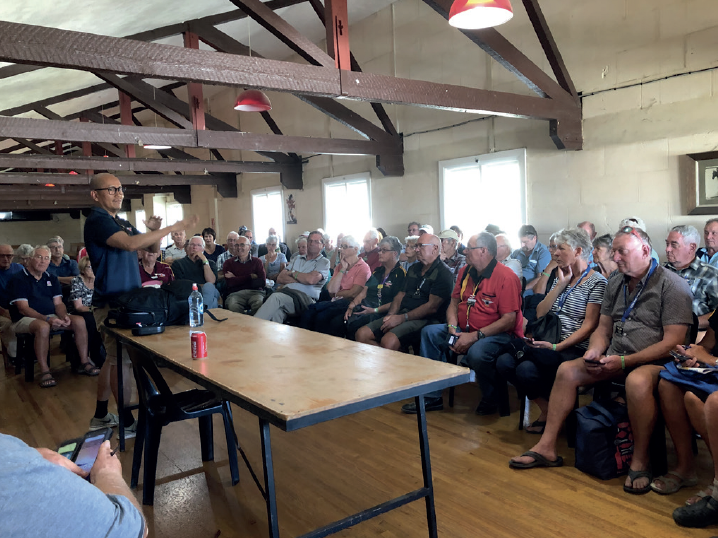 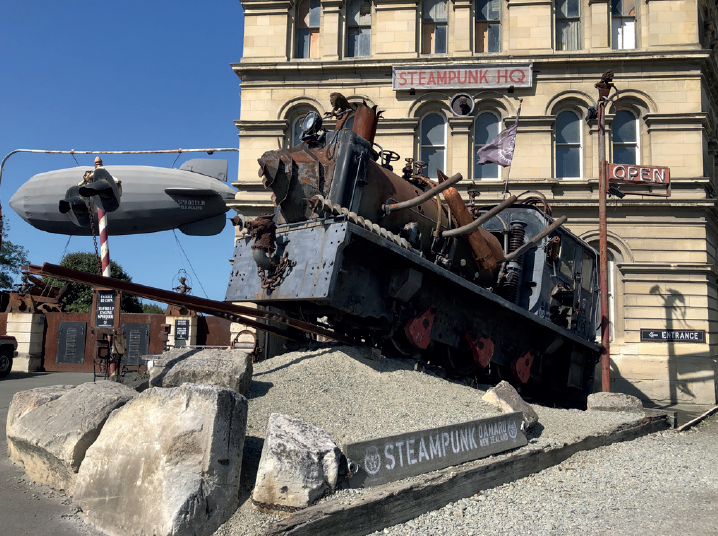