About the trail
2 km one way, Part of the Te Apiti – Manawatu Gorge network of tracks, Te Ara o Mahurangi is an exciting downhill mountain bike trail. This intermediate level trail takes riders on a fast-paced downhill ride through 2 km of native bush.

Please note this is a one-way (downhill only) trail. It is not suitable for beginner riders due to some reasonably steep sections. Currently, it is best avoided after heavy rain as it can get very slippery. This is a shared-use track. Follow the mountain 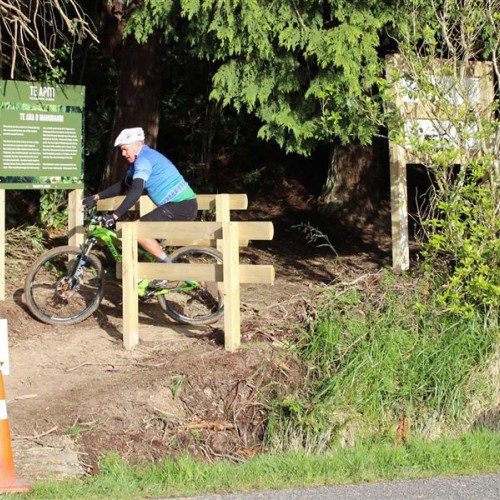 'Manawatu Mountain Bike Club rider on the trail at the opening event.'

Te Aro o Mahurangi is an exciting new mountain bike trail that takes riders on a fast-paced downhill ride through 2 km of native bush. It is rated an intermediate trail, or level 3. The trail is not suitable for beginner riders due to some reasonably steep downhill sections. Currently this trail is best avoided after heavy rain, as it can get very slippery.

Riders have the option of riding 1.6 km up Hall Block Road before starting their descent on the trail. Alternatively, there are turning bays where vehicles can drop off bikers at the top of Hall Block Road near the start of the trail.

The trail is the result of a collaboration between the Te Apiti – Manawatu Gorge Biodiversity Project and the Manawatu Mountain Bike Club, who will continue to maintain this trail.

For a trail map and further information, visit Te Apiti website, where you can also find out about Te Apiti and the great things on offer within the wider Manawatu Gorge.

The trail was named after Mahurangi, the famous pet dog who was owned by Tara, son of the ancient ancestor named Pouheni. Tara lived in the 14 century and as a young man set out on a journey which began in the Turanganui-a-Kiwa district (now known as Gisborne). Tara and Mahurangi – who was a very energetic dog who raced ahead of his owner at every opportunity – travelled south together naming various rivers, lakes and places as they went.

After travelling through the Hawkes Bay area and the great forest of Te Tapere nui o Whātonga (later to be known as the Seventy Mile Bush) the pair emerged near the eastern entrance to Te Apiti – Manawatū Gorge. At this point, Tara lost sight of Mahurangi and only by the sound of his barking was he found. Since that time, this area has been referred to by the local Rangitāne people as ‘Te Waha o te Kurī ’ meaning ‘the voice (barking) of the dog’. This historical event is commemorated in the name Te Ara o Mahurangi – Mahurangi’s track.

Please note this is a one-way (downhill only) trail. It is not suitable for beginner riders due to some reasonably steep sections. Currently, it is best avoided after heavy rain as it can get very slippery.