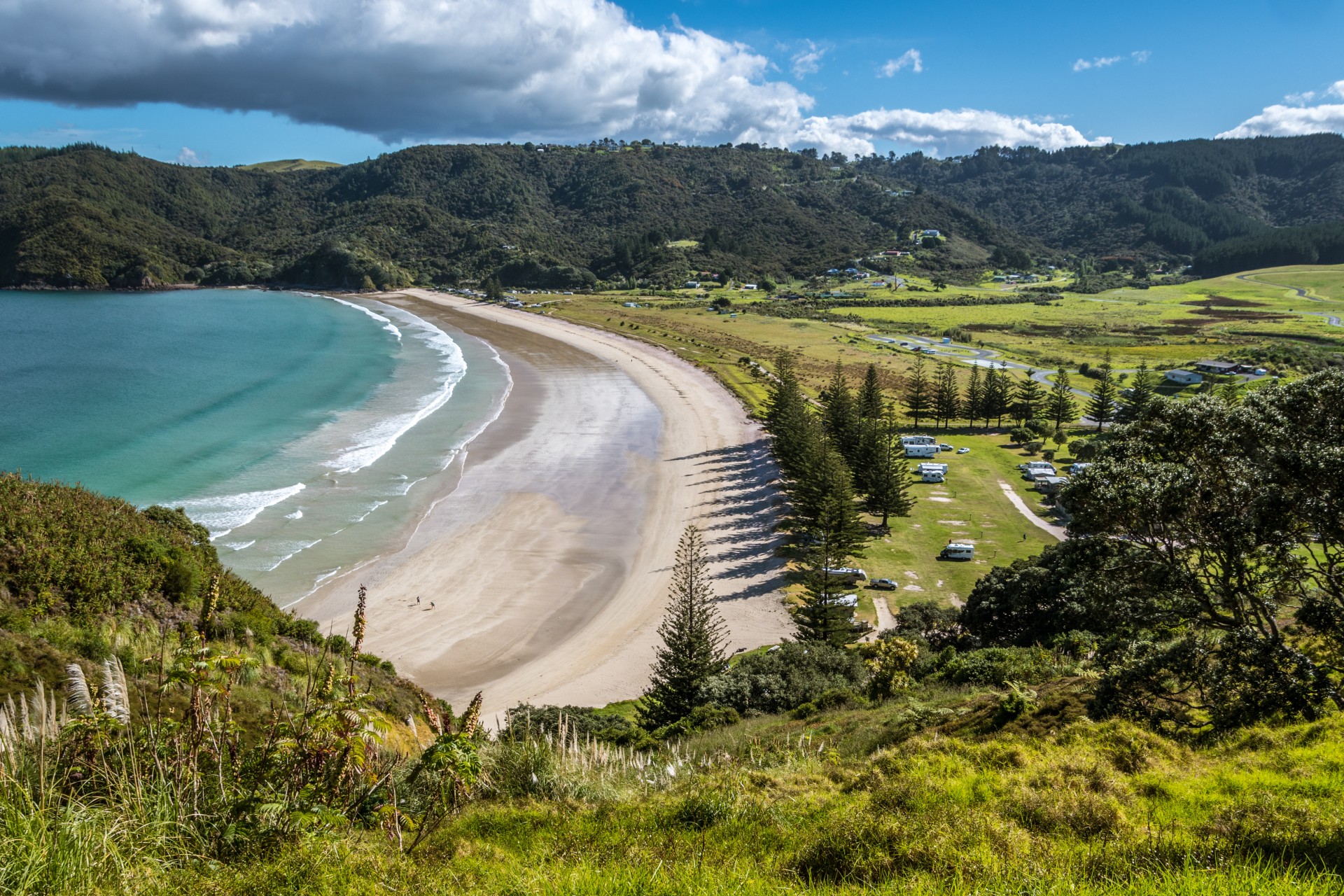 Being on the road at Christmas can mean a change in customary festive concepts. Jill Malcolm recollects some December days that may not be traditional — but they were great fun.

I collect memories and I go to new places and try new things; that’s how I discovered that celebrating Christmas in a motorhome can be an awesome experience. What is lacking in contact with family is replaced with casual friends who become family for the day. 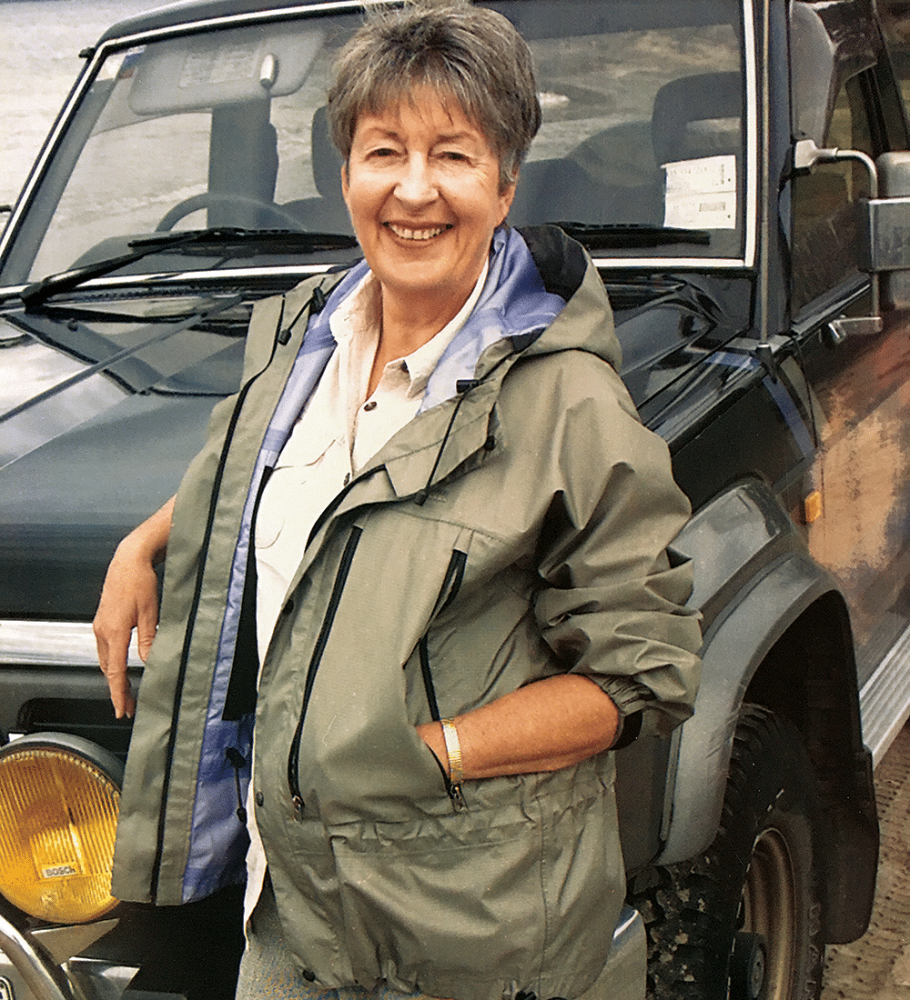 INTREPID TRAVELLER JILL IS HAPPIEST WHEN SHE’S ON THE ROAD, MEETING NEW PEOPLE

One Christmas Day that will never fade from my mind was in 1997, while Bill and I were travelling the South Island in a Rainbow Hino bus that Bill had converted. We’d been on the road for a year and the coffers were nearly empty so Christmas was going to be low-key. On Christmas Eve we pulled into a small seaside spot hugged by bushes near Ruby Bay. A colourful group of gypsy truckers had already made their claim but they waved us into the space with welcoming gestures: no ‘territory hogging’ here.

Christmas morning was heralded, not by carols but by the chanting of tui and blackbirds. The truckers were sleeping late. For breakfast, Bill and I sat in a watery sun, watching stretch marks pucker the surface of the sea and treating ourselves to Havelock oysters drizzled with lemon. We walked, swam, rang friends and I attempted to cook chicken pieces on the barbecue with potatoes and kūmara. The setting was beautiful, even if this particular meal didn’t turn out to be much of a feast.

By lunchtime, the gypsies had begun to emerge looking tousled and unfocused. These maverick souls were earnest students of alternative lifestyles. On the side of one truck were two homemade posters. One announced a Blue Moon Rave and the other an invitation to join The Awakening of Genetic Memories while stomping with Friends. I was charmed. I’d always admired the independence of dreamers and their indifference to judgement of their world views.

Our group was unfailingly generous and cheerful. In the centre of the area, a small pine tree grew, and they dressed it with colourful scarves, flowers and stars made of cardboard. I added some tinsel and we sat on the ground around the tree and meditated to the hum of Tibetan bowls played by a scantily-clad man-boy with dreadlocks and an assortment of facial piercings. Thankfully there was no stomping.

For the Christmas feast, we collected mussels, steamed them open in a pot on an open fire and swallowed them down with the aid of some rather indifferent chateau cardboard. For dessert, we collected blackberries and ate them with Moro bars. In the evening the truckers enthusiastically staged the worst concert I have ever witnessed. They begged us to contribute, so we did, with a dreadful performance of a Christmas carol. No matter; we were applauded and cheered as if we’d sung in Carnegie Hall. Sometimes being in an odd place is exactly where I want to be. For its difference, camaraderie and good cheer, this was one of the most interesting Christmas Days I’ve had. 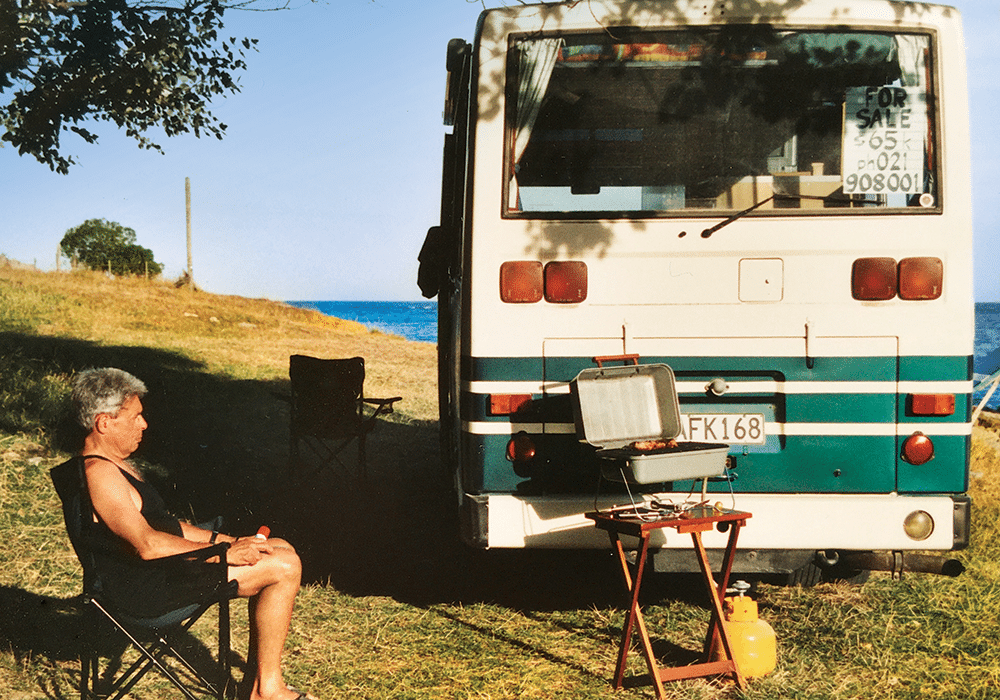 BILL ON CHICKEN COOKING DUTY IN NELSON IN 1997

Albany, clinging to the bottom end of the continent, is the oldest European settlement in Western Australia. The large natural harbour was claimed for king and country during a British expedition lest the French claim it first. And when the brig Amity reached the vicinity on Christmas Day 1826, it disgorged the entire population of the settlement which was to be named Fredericktown. Those put ashore (with stores for six months, sheep and pigs to keep them in vitals) comprised 23 convicts, 18 rank-and-file soldiers, a sergeant, a captain, a surgeon, a storekeeper and the commander, Major Edmund Lockyer.

So it was a strange coincidence when exactly 183 years later, on Christmas Eve 2009, while I was washing my hair in the ablution block of a local campground, I struck up a conversation with a hard-edged looking woman called Barbara Lockyer who came from Colac. Bill and I had been on our all-over-Australia caravan odyssey for four months at that stage, and as RVers do everywhere, Barbara and I started swapping yarns.

“Anyway what are you fellas doing for Christmas?” she asked eventually.

“Well y’are now,” she said. “Get yourselves down to the market and grab you’selves a couple of crayfish and a liquor something at the Botlo.”

And that’s how we came to spend Christmas in Albany eating crayfish, rock lobster and prawns and drinking champagne in the comradely shade of a eucalyptus tree, with 15 other orphans from the east coast of Australia — our family for the day. Our presents were the sea and the high blue sky; our decorations were a bunch of gum nuts tied with a red ribbon and some bright orange blooms arranged in a jar. Like pohutukawa, the prolific Western Australian Christmas tree obligingly blooms around yuletide. We’d seen thick clumps of them everywhere with their blackened trunks and riots of orange flowers that, seen against a blue sky, lit up like an explosion of neon lights.

On Christmas Eve we were invited to the small church on the outskirts of town, where we belted out carols led by two enthusiastic female vocalists. The minister, a square-shaped bespectacled fellow in a check shirt and shorts, gave no-nonsense Jesus-loves-you messages in between the songs. It was all over in an hour. Father Christmas and an overweight elf appeared and handed out bags of sweets to the kids. Adults, it was announced, would get free ice creams after the service at an adjacent parlour. Sadly this never eventuated; the ice-cream vendor had gone home.

There is a much more famous church in Albany: St Johns Church, in the centre of town (circa 1840). St John’s is not only the oldest church in Western Australia, but in 1918 after WWI, was the site of the first commemorative dawn service. We visited this famous place on Christmas morning 2009, but not at dawn.

On Boxing Day our new family dissolved. A few people intended to stay in the camp but most went on their way to somewhere else. We drove to Esperance, 500 kilometres to the east of Albany, which is best known for the nearby Cape Le Grand National Park. I never came across Barbara or any of the others again. 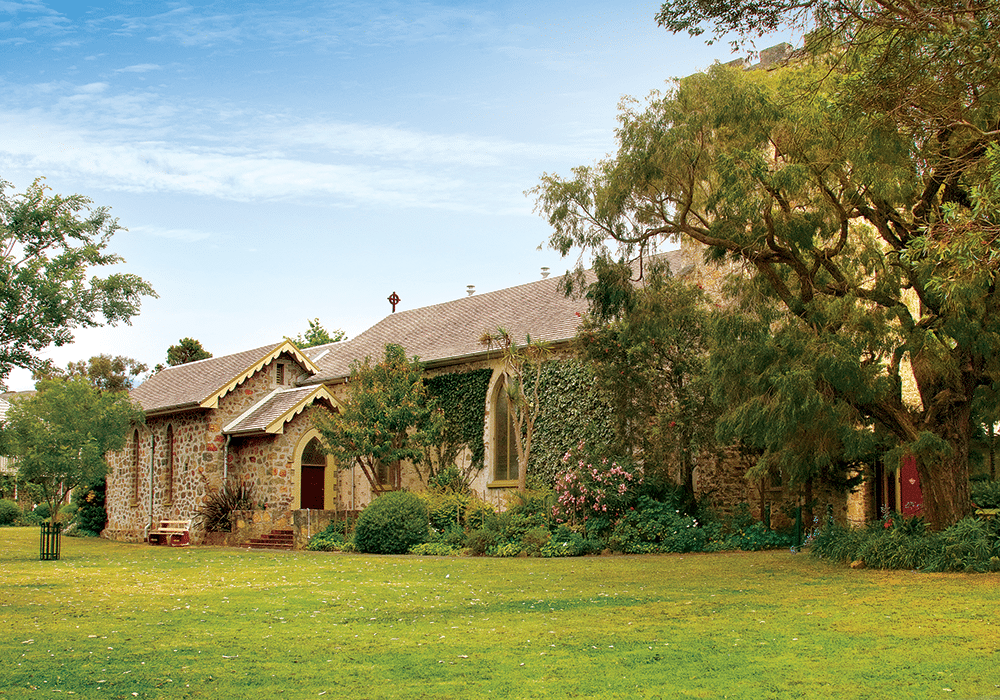 ST JOHN’S CHURCH IS THE OLDEST IN WESTERN AUSTRALIA

Some years later, back in New Zealand, we spent Christmas in a new-to-us Jayco motorhome at Matauri Bay in Northland. Earlier in the year we had parked next door to Terry and Dawn, who were living permanently in their splendid converted bus. Dawn knitted brightly-coloured slippers to order, and made decorative balls out of tiny shells and pebbles she collected from the beaches. These creations sorted the knotty problem of what to buy for Christmas presents.

Terry and Dawn had left by Christmas morning, but many other RVers in the campground, most of them strangers, greeted each other with full-blooded hugs and good wishes and set up their chairs on an empty patch of grass. An assortment of barbecues was organised to cook eggs, bacon, baked beans and David the fisherman’s bountiful snapper that he had caught and gutted early that morning. With this brunchtime feast, we drank sparkling wine, which was not exactly degustation but seemed perfectly appropriate for the occasion. Sometime later, someone turned up the music and we danced, less than gracefully but laughing with unfettered glee at the absurdity of it all. Breathless from the exertion, I took a break and sat observing. I was flooded with goodwill towards these men and women of whom I knew very little but who offered me a sense of belonging.

In the main, RVers are unpretentious adventurers who like to include anyone who ends up in their orbit. They know how to make the best of any situation and sans trimmings, adornments or fine food, this was a Christmas party like no other. 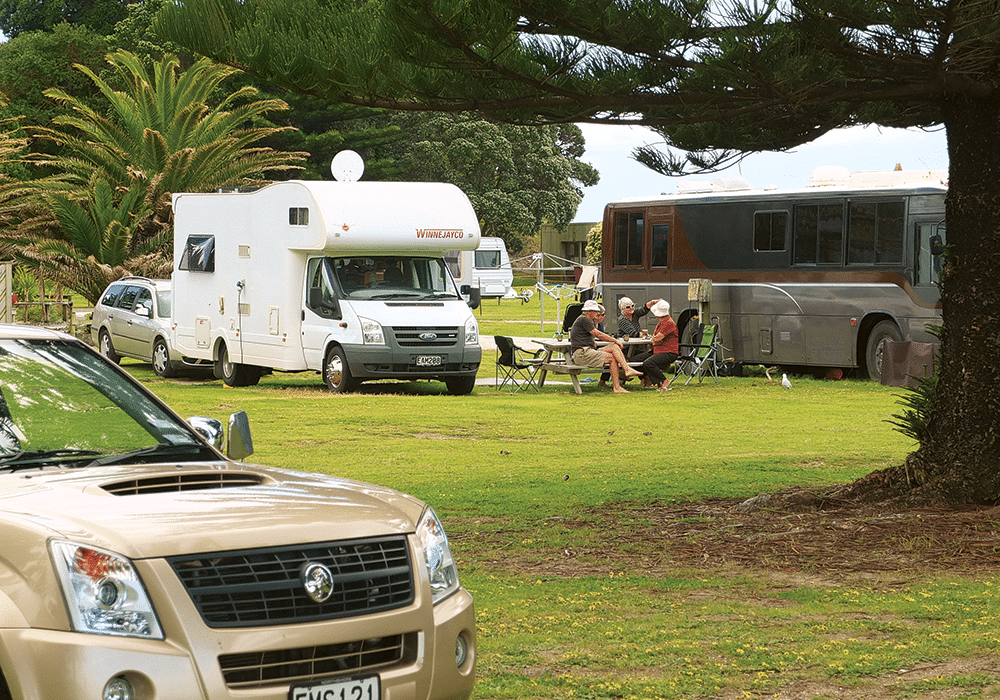 THE PARTY’S ON AT MATAURI BAY

Make it an Alan Rogers Travel kind of holiday&hellip;&hellip; 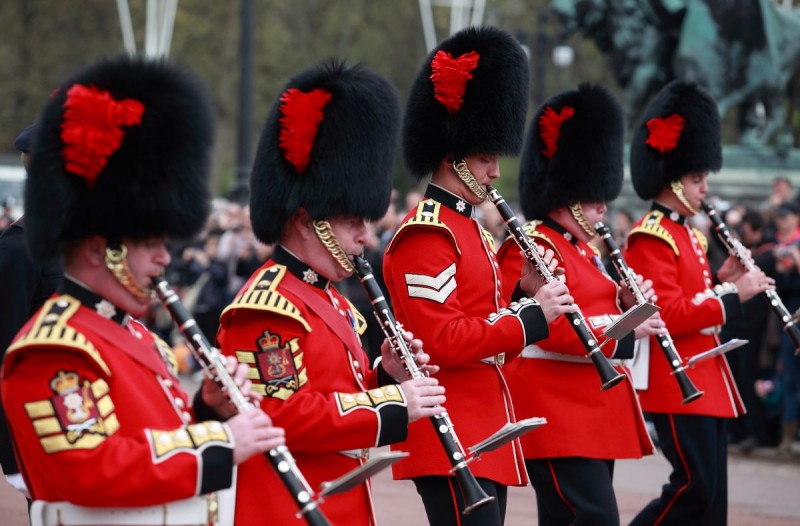 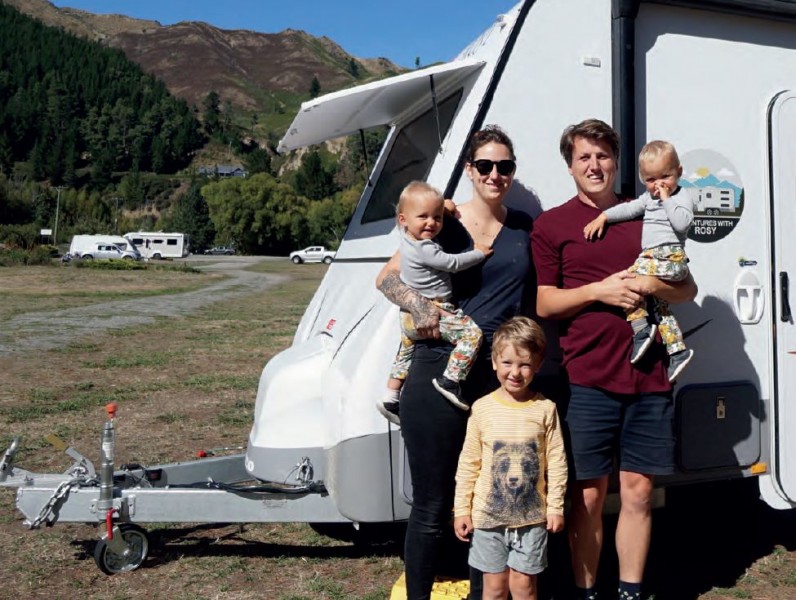 A motorhome they built themselves is a great conversation opener&hellip; 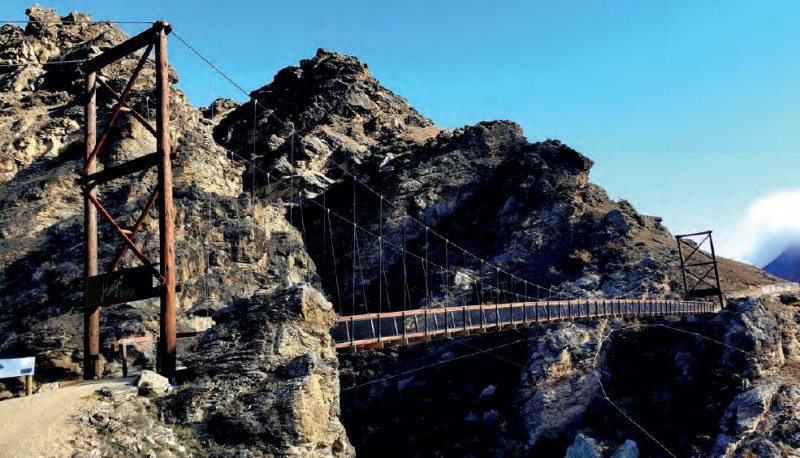