Ditte and I had spent almost a week in the Coromandel biking and walking, and generally lazing around in the excellent and virtually deserted DOC campgrounds surrounded by stunning scenery.

November had been an ideal time to visit and the weather had been stable and warm. We had driven our Explorer Navigator up the east coast of the Coromandel, pausing for a night up the Wentworth Valley then we cut west on ‘the 309 Road’ appreciating the extra ground clearance the 4WD Ranger chassis affords.

From there it was straight up to the DOC camp at Stony Bay – our new DOC Pass proving the second best thing after NZMCA membership! We biked around the spectacular Coromandel Walkway and headlands track to Fletcher Bay, had lunch there and basically came back the same way. On our next ride we rode towards Fletcher Bay again, but took the ridge top track just after Poley Bay.

This track is insanely steep in places and passes an old mustering and track builders’ hut. From the lofty ridge top, a tunnel-of-bush downhill wings its way back to the Stony Bay Camp, making it well worth the sweat and toil. There was regenerating kauri and lots of birdlife along this fern-lined trail. We then moved downstream to another nice DOC camp up the Kauaeranga Valley in the Coromandel Forest Park.

Here we found endless walking tracks and a compact mountain bike park with some very cool trails hidden amongst an exotic plantation of rather unusual pines. We checked out the excellent kauri dam trail by the DOC Visitors’ Centre before motoring out to Thames. After refuelling it was back on the road to Paeroa and the Hauraki Rail Trail, but first a stop at the Cheese Barn and Cafe at Matatoki, just 11kms south of Thames. 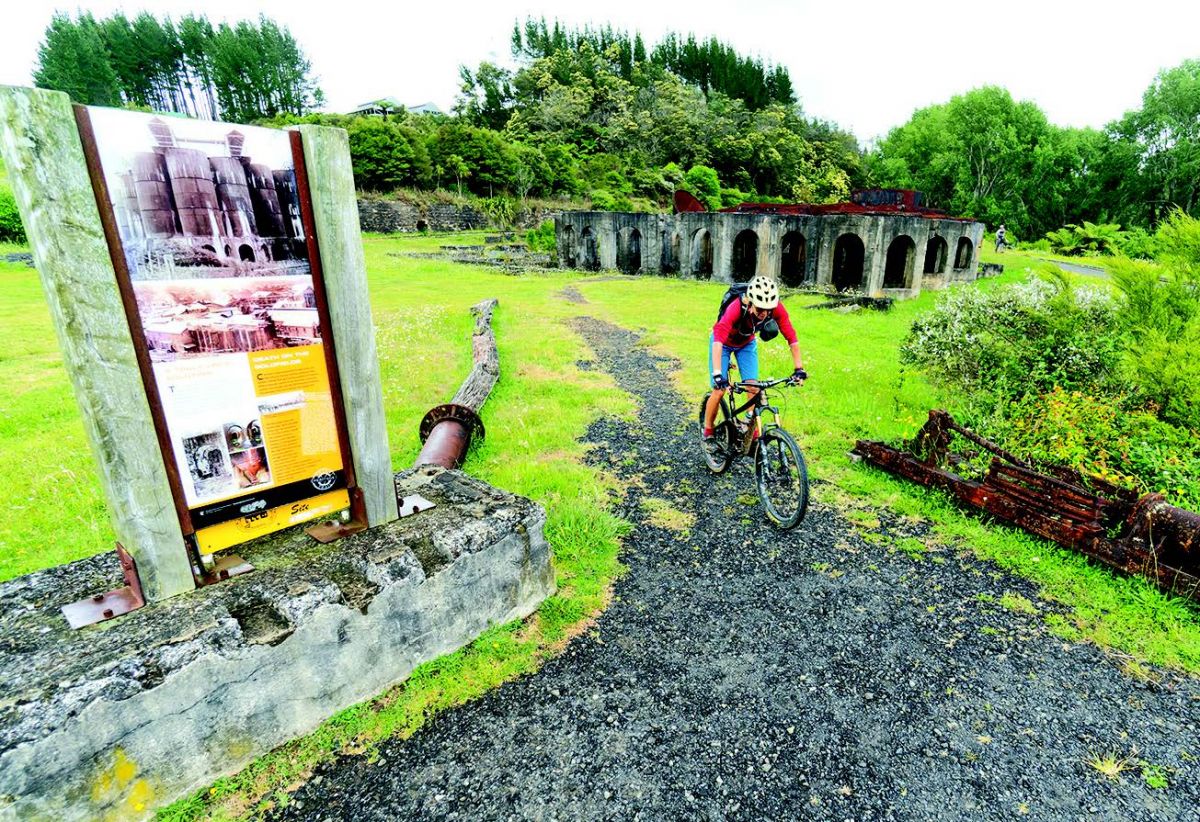 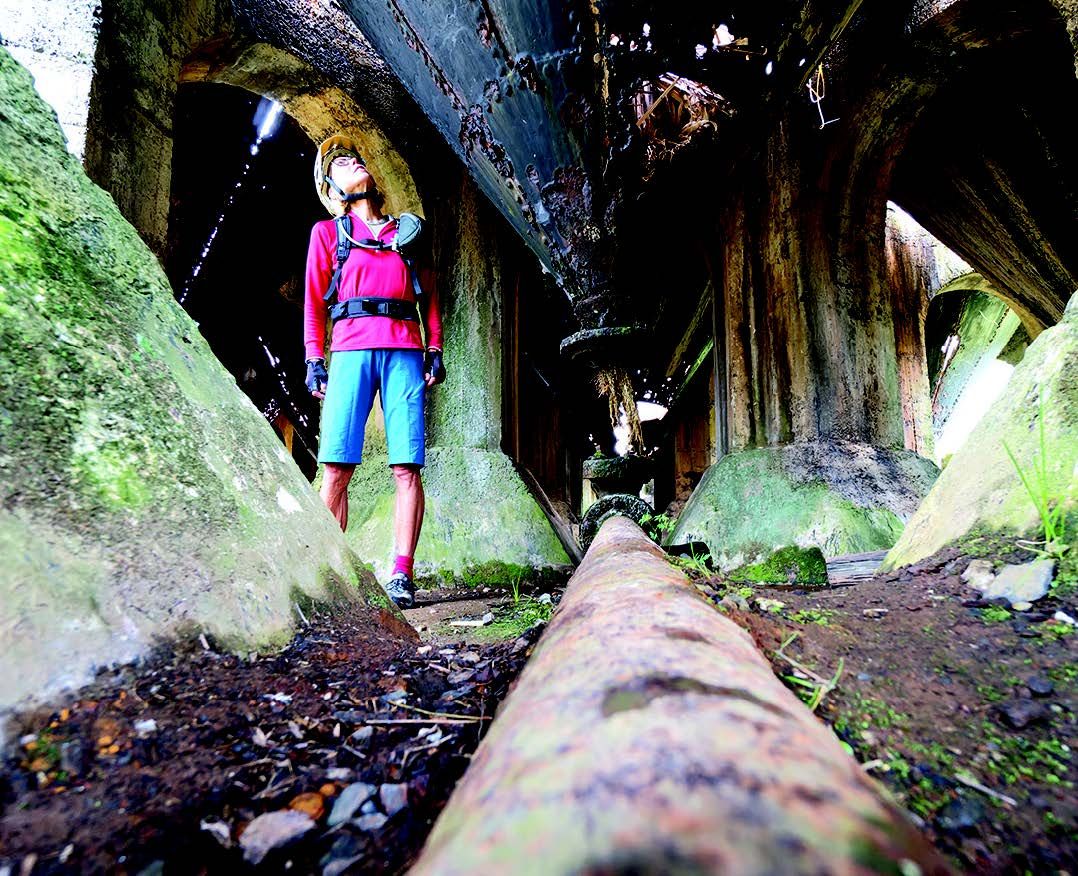 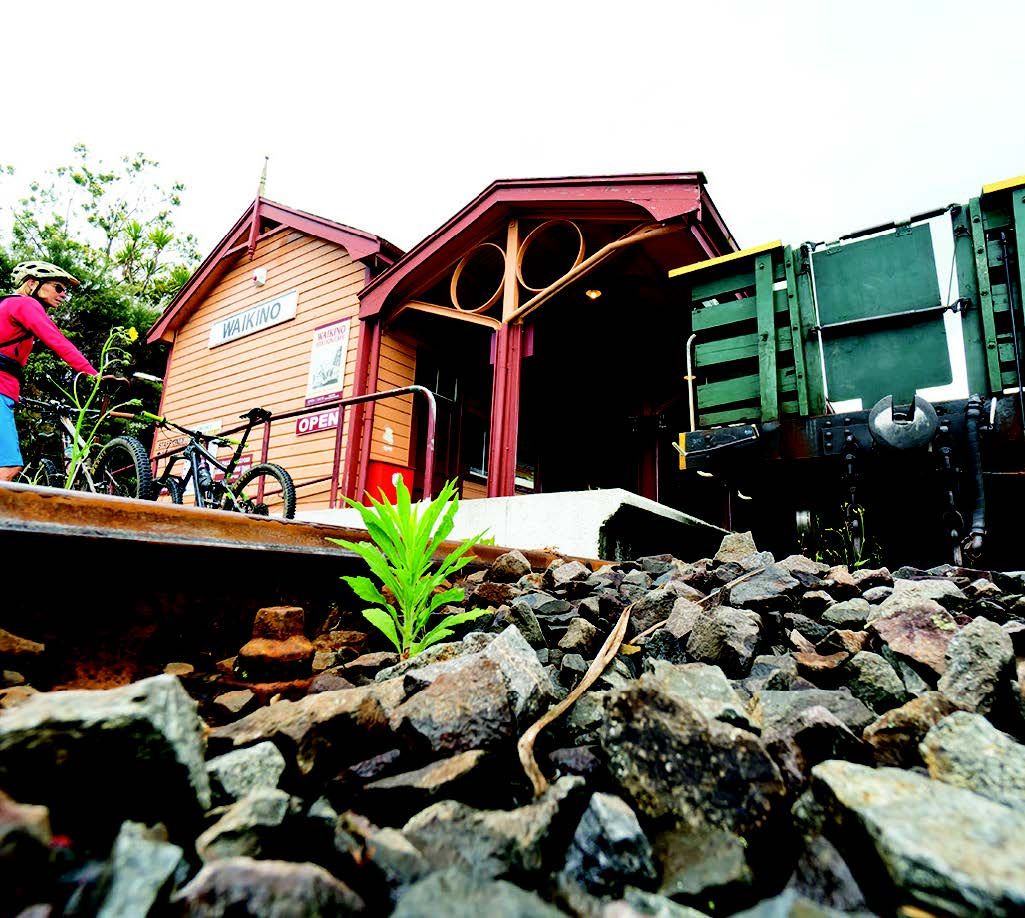 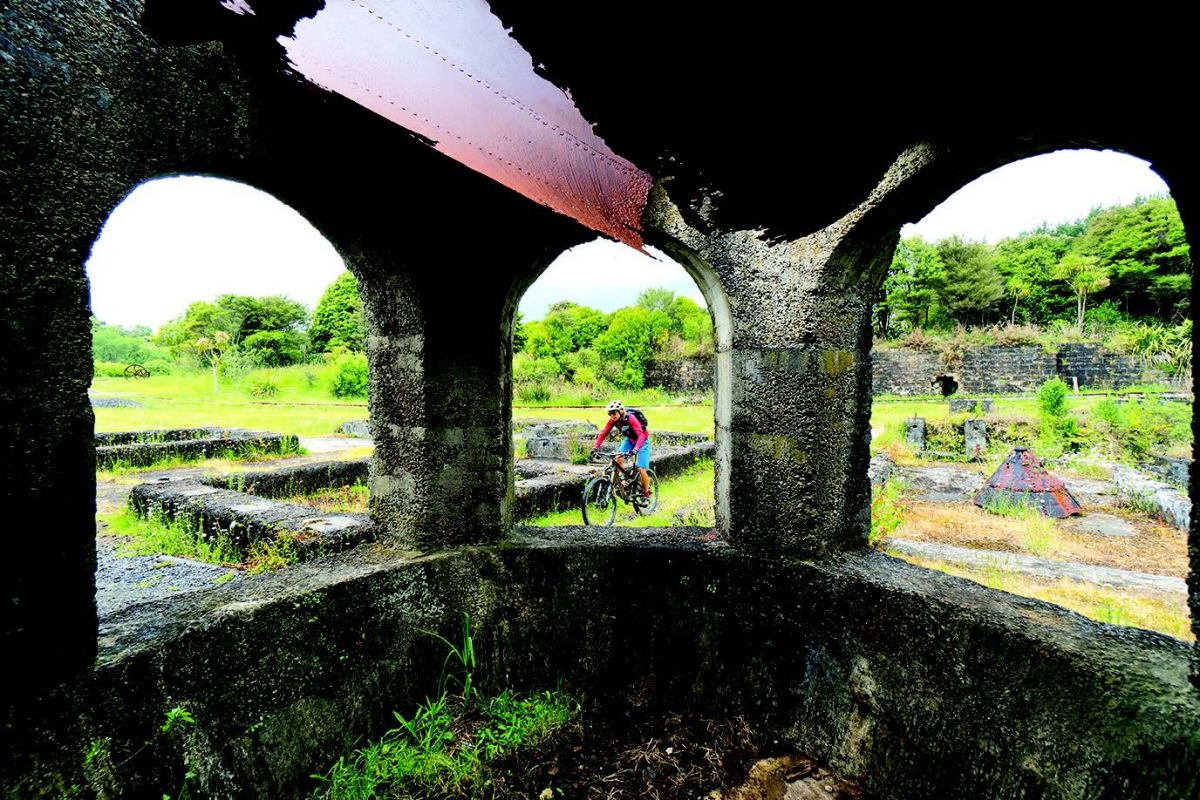 The Hauraki Rail Trail would be the most accessible and easiest of the NZ Cycle Trail network. It’s a relatively flat 160km long ride on quiet back country roads, rail corridors and purpose-built cycle trail. The mix of stunning scenery and historic mining and railway infrastructure is second to none. The ride can be conveniently split into four sections and attacked over as many days as you feel like. It’s a work in progress as sections are upgraded and added to over time.

We rode out of Motorhome Friendly Paeroa heading to Waihi on the only branch line of the Hauraki Rail Trail. Quiet back-country roads took us past Ngahutoitoi Marae and onto the rail corridor following the Ohinemuri River going upstream. The settlements of Mackaytown and Karangahake were quick to arrive. There is a raft of old gold mining relics and walking tracks hidden below the 544-metre Karangahake Mountain just a short sign-posted (Rail Tunnel Loop Track) pedal from the bridge-side parking spot. We found something solid to lock our bikes to and headed around the Windows Walk after checking out the amazing red rusty mining relics of the Crown Mines, all beautifully preserved by DOC.

There are many more tracks and trails to explore but we figured a separate visit with some more appropriate walking gear would be the go. You can continue on the loop track but this bypasses not only the kilometre long rail tunnel but the substantial steel portal rail bridges at each end. They cross the Ohinemuri River as it does a lazy loop at the end of the Karangahake Gorge. The tunnel is well lit but we took our bike lights – just in case the power went out.

From the tunnel we cruised the remainder of the Karangahake Gorge to the equally amazing Victoria Battery site, the largest and reputedly most advanced gold extraction facility in the Dominion at the time, and by far the biggest producer of gold and silver. Hive-like concrete structures peppered with steel funnels and pipework are all that remain of the cyanide tanks. 800 tons of quartz rock a day came by rail from the Martha Mine in Waihi feeding a 200 head stamper.

Above the tanks we found more mining relics and a narrow gauge railway that the local tramway society use in conjunction with their guided tours of this vast complex, its tunnels and ore roasting kiln and entry to their mining museum. For more details, check out www.vbts.org.nz Full of history we rumbled over the Waikino Rail Bridge to the beautifully restored Waikino railway station cafe and historic train ticket office. They have great food and coffee and if you time it right, a lift to Waihi with your bike on the old train can be purchased.

The trail meanwhile snakes its way to Waihi still following the Ohinemuri River. Motorhome Friendly Waihi is famous for the massive amount of gold and silver produced by the Martha Hill Mine and the huge hole that was dug and array of mining relics that still remain. The scale of the operation has to be seen to be believed. We locked up the bikes and had a captivating walk around the rim of the mine pit. 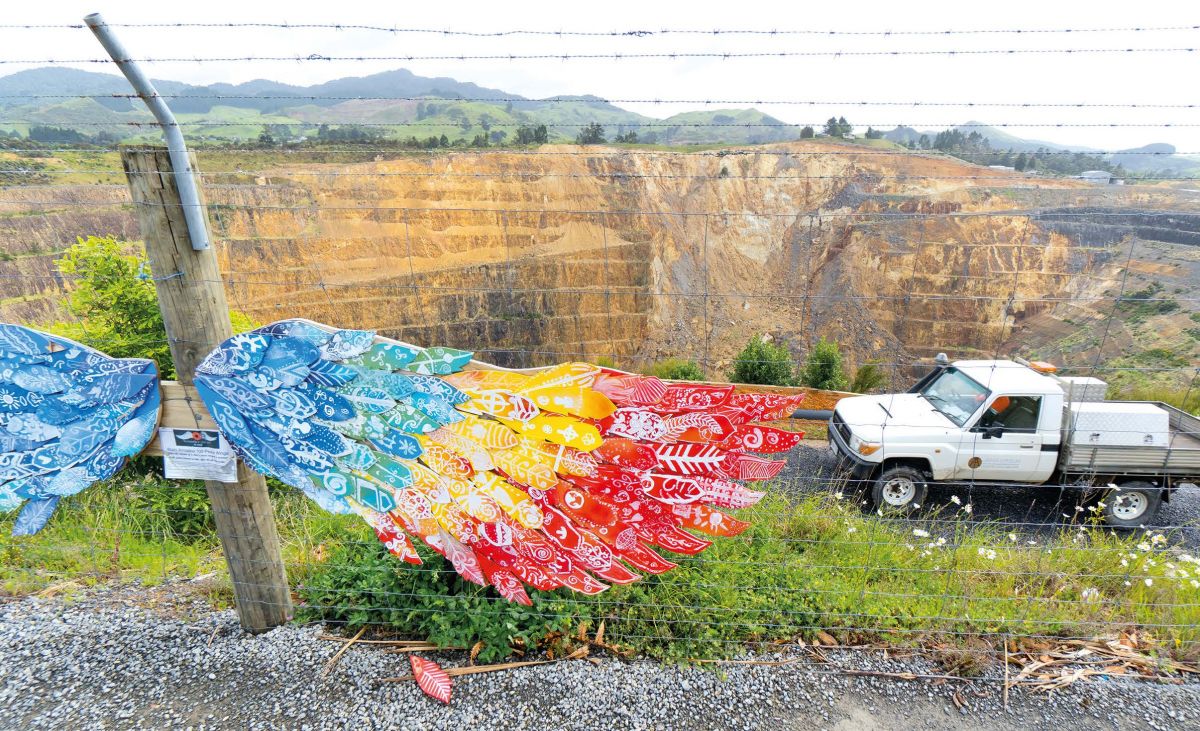 There are some great MTB tracks in Waihi. They start from the end of Clarke St and circumnavigate the 225-metre Black Hill with views across to the old Martha Mine Tailings Dam. These are grade three tracks that go through pine forest and regenerating native scrub, and they kept us well entertained for an hour or so. We really enjoyed the switchback downhill section and the fast flowing traverses.

After a cafe break we were back on the bike reversing our pedal strokes, aided and abetted by a slight downhill and good tail wind all the way back to Paeroa. After packing up we headed towards the motorhome friendly town of Te Aroha. We came into town via Te Kawana Rd where Earth Produce has a strawberry farm with accommodation and real fruit ice-cream and this proved a lifesaver on a very warm and still afternoon.

Dave and Ditte both recommend New Zealand made Ground Effect clothing and have used it since ‘year dot’. “It keeps us cool, warm and dry in the forever changing conditions we often encounter out riding or walking here and overseas,” says Dave. “Ground Effect’s use of natural fibre and windstopper fabrics really makes a difference and they last for yonks. “They must be good – the company is celebrating 25 years of expertise this year.” For more information on the Ground Effect range, check out www.groundeffect.co.nz 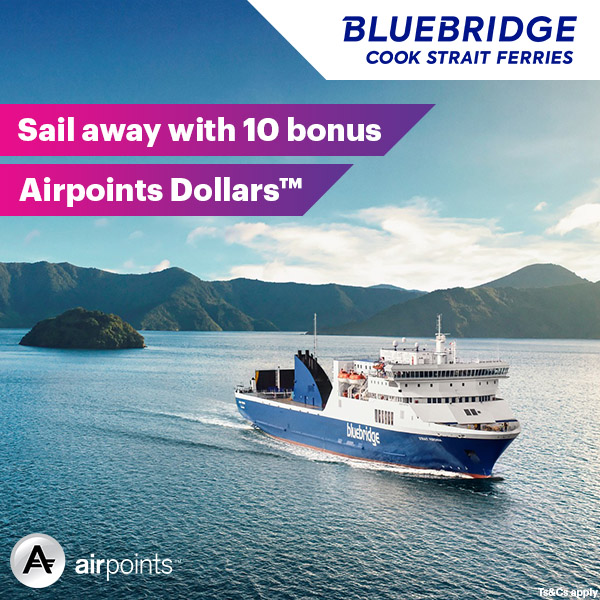 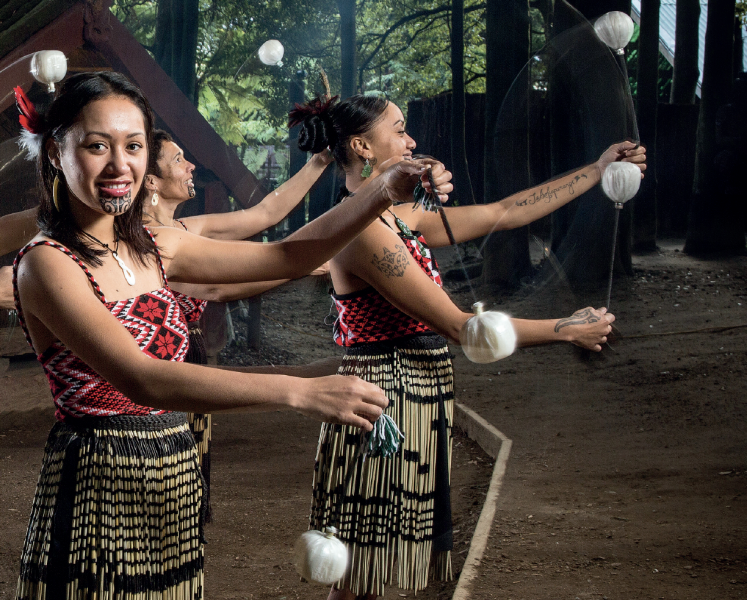 Sometimes a picture manages to capture not just a special moment, but an entire attitude to life..…

With the busy summer season, it’s time to remind members of the need for courtesy when you’re on the road… 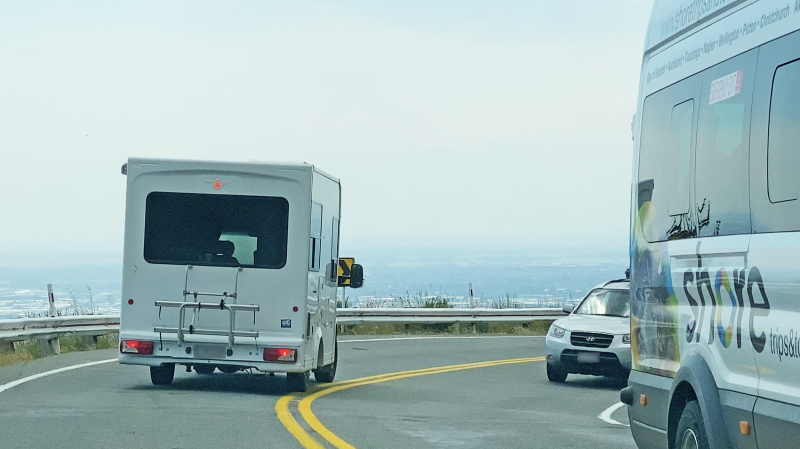 The eyes of NZ are upon us
Wed, 8 Jan