About the trail
19 km one way. return via same track.
one way.
Follow an old tramline (1898 - 1928) on a relatively flat track through the spectacular Waitawheta Gorge - with interpretation panels as well, it's a great option for kids.

No Dogs allowed. This track should not be attempted when heavy rain is forecast from the north to south east direction. No mountain biking permitted. 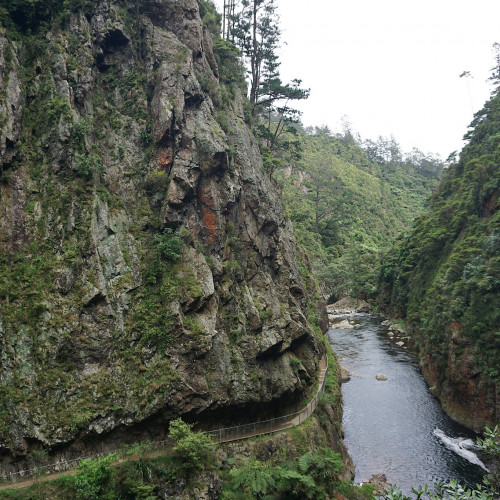 'Crown Tramway winds itself along the Waitawheta River' 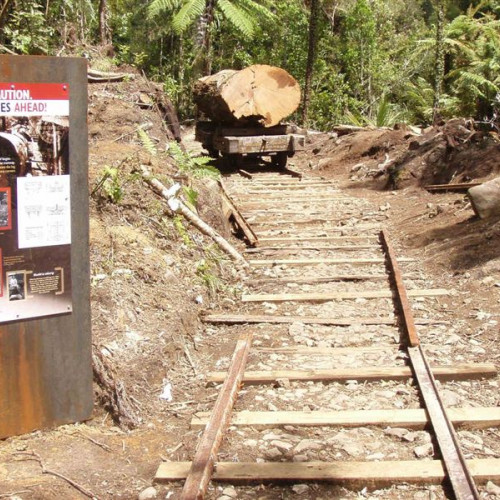 Follow the Waitawheta Tramway, stopping at the various information signs to find out when, why and how the tramway was built.

The tramway is relatively flat, and nice and wide. After about an hour and a half the track crosses a large suspension bridge to the site of a replica logging bogie (a tram cart that carried the massive logs). This is a great spot for lunch and to spend time taking photographs.

A short loop track near to the logging bogie offers a detour to the site of an electricity pylon dating from around the year 1900. To complete a shorter, easier trip, return from the logging bogie back down the tramway to the car park.

Alternatively, continue south along the tramline through the spectacular Waitawheta Gorge. The main track requires one river crossing but there is a bypass track that requires just a few small side stream crossings. The main track then leaves the river and through a campsite before reaching the toilet bowl waterfall, the Waitawheta Hut, and the site of the old logging mill. Return via the same track, or spend the night to explore more of the park.

A shorter walk with no river crossings can be taken, just over an hour up the tramway to the site of a replica logging bogie which shows how kauri were transported down the valley. This trip takes in the lower tramway with information boards explaining the story of kauri logging here, before returning the same way to the car park. Suitable for older children.

The start of the track is about 11 km from Waihi.

In Waihi, turn off SH 2 onto Kenny Street. Turn right into Victoria Street and follow this as it becomes Frankton Road, then Waitawheta Road. After about 9 km, turn off Waitawheta Road into Franklin Road. Follow this to the parking area at the end.

Waitawheta is one of the most spectacular bush tramways ever built. A relatively lengthy (14 km) section survives in near pristine condition.

Waitawheta Hut is located on the site of the Waitawheta Sawmilling Co. cookhouse.

Before you go into the outdoors, tell someone your plans and leave a date to raise the alarm if you haven't returned. To do this, use the New Zealand Outdoors Intentions process (external site) on the AdventureSmart website. It is endorsed by New Zealand's search and rescue agencies and provides three simple options to tell someone you trust the details about your trip.