About the trail
41 km one way. The location of the Tararua Wind Farm - along the northern ridge of the Tararua Ranges - is recognised as the best location for a wind farm in New Zealand and ranks with the best in the world. 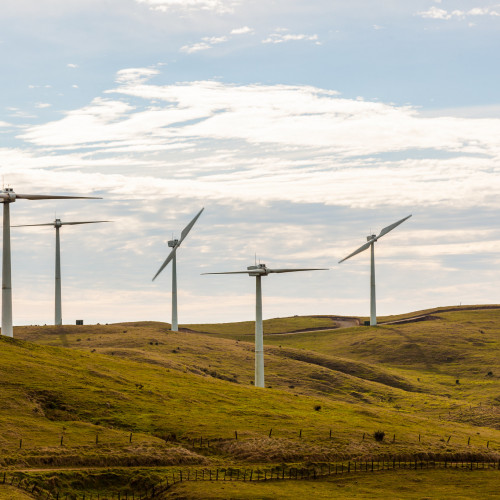 The Windfarm Ride affords you the rare opportunity to see both the wonders of nature and the marvels of modern engineering. To glimpse the mighty wind turbines is an experience in itself, but to glimpse it on the back of a bicycle is one that you’ll never forget.

There are currently forty-eight V47-660kW Vestas wind turbines at the Tararua Wind Farm. Each is mounted on a 40 metre steel lattice tower. The three blades are 23.5 metres long and have the ability to feather in different conditions to maintain a relatively constant speed of 28.5 revolutions per minute. The turbines can also turn to capture winds from different directions. The turbines have the capacity to generate 31.7 Megawatts of energy - which is roughly enough to meet the electricity requirements of 15,000 homes.

The location of the Tararua Wind Farm - along the northern ridge of the Tararua Ranges - is recognised as the best location for a wind farm in New Zealand and ranks with the best in the world. This is because the average wind speed at the site is approximately 35 kilometres per hour(kph), with the wind speed above the minimum required to generate power more than 85% of the time. The turbines start-up in winds of 14 kph, optimal operating wind speed - when each turbine generates its capacity 660kW - is 54kph. When wind speeds reach 90kph the turbines shut down. Wind power is recognised as potentially the most environmentally friendly way to generate electricity currently available.

The Tararua Wind has not had any irreparable impact on the landscape. The lattice towers minimise visual pollution and the turning blades generate minimal noise which does not affect the surrounding farming environment. The Tararua Wind Farm has provided a unique opportunity for Tararua's rapidly growing tourism industry with several of the farms surrounding the site diversifying into tourism to accommodate the high number of people wishing to visit the site. Public access is available via Hall Block Road in Ballance, and a variety of tours and adventure activities are also available to tourists.