About the trail
57.5 km one way. Just beyond here, you’ll see one of the best sights of the walk - primaeval forest on the far side of the river - the unfarmed side. The track stays on farmland, passes an abandoned dunny, glissades through totara groves and has some great picnic spots on. 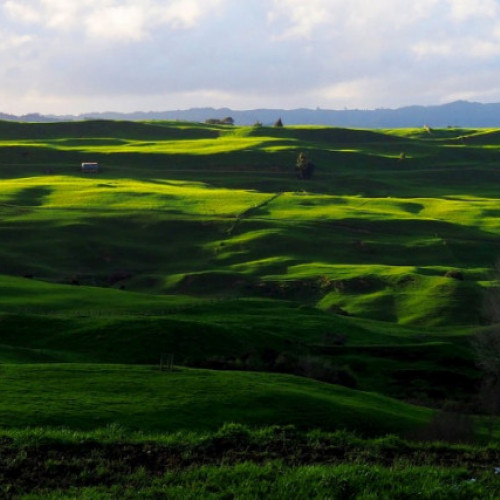 Potential hazards; Vehicles; Avoid this track when the river is in flood.

From the shearing statue, continue south along Waitete Rd for just over 1km, then turn left onto West Ahuroa Ford, taking a lot of care as it passes through operational areas with heavy vehicles, head alongside a wire mesh fence then turn right down by the river (without crossing the river).

Follow the Mangaokewa River along, heading upstream.  The track skirts the Waitete Sawmill, and McDonald’s Limeworks (with a kiln producing burnt lime for roadworks, as well as lime ground for its many other uses from toothpaste to topdressing). You also pass an old cement works, then cross over the river on a vehicle bridge.

Once across the river, the track follows a disused quarry road to an abandoned lime quarry site, with pipeline and wooden towers remnants (limeworks and lime quarrying has been a traditional Te Kuiti industry).  The track ascends beyond the quarry to an elevation of 100m, with good views back across Te Kuiti and up the valley ahead. (Te Kuiti High School students built the picnic table at this viewpoint, and also, as you descend from here, the footbridges across small creeks).

The track enters bush for the last kilometre, passing one pretty waterfall en route, then crosses the stream on a suspension bridge to reach Mangaokewa Reserve.

From the North end, be aware that other tracks lead away on both sides of the river so cross the swing bridge to the true left of the river - i.e. the Waiteti Viaduct carpark side of the river - and continue walking from the southern end of the carpark.

The first 2.5km of bush is groomed and nearly predator-free thanks to the Mangaokewa Reserve Trust, which has also released native birds in there. You’ll pass a huge kahikatea, and through the riverside bush may glimpse stalactites encrusting the far edge of the limestone gorge. The trail then crosses a fence we put in to keep sheep out of the reserve and breaks into farmland.

Just beyond here you’ll see one of the best sights of the walk - primaeval forest on the far side of the river - the unfarmed side. The track stays on farmland, passes an abandoned dunny, glissades through totara groves and has some great picnic spots on the way through. There are one or two steep slopes you sidle across so take care across those, particularly when wet underfoot. It enters the shade of pine and eucalypt forest near the southern end, then follows a farm track that takes you through to Mangaokewa North Road (note: there'll be a gate on a grass median track which evolves into a road).

Note: If wanting to be picked up here, you'll need to have pre-organised transport out - it's a long way from anywhere and there's zilch traffic.

Continue SE on Mangaokewa Rd and follow it in an easterly direction for approx. 8.5km where it'll turn northwards for 2km, then turn easterly again (at the intersection with Waipa Valley Rd on the west side). Keep following it (it starts to turn south) for another 12km to meet up with SH30. Turn left/east onto SH30 and walk for 8km. Turn off the highway onto Maraeroa Rd on the south side. After 1.5km, take the road leading east/north/east for another 2km until reaching DOC's Pureora Forest Park Headquarters.